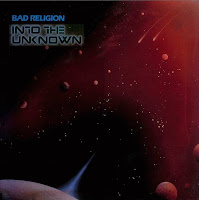 Into the Unknown is the second album by Bad Religion, which was released in 1983. The album was a major change from their previous style, delving into progressive rock heavy in keyboards, though it wasn't at all popular as fans at the time were confused by the sudden style shift. When the band released the 1991 compilation album 80-85, a collection of recordings before their third album Suffer, Into the Unknown was not part of the compilation, also partly due to the band changing their style.
The album is widely reputed to have been a major factor in their 1984 breakup as the recording sessions were riddled with discord. As a matter of fact, drummer Pete Finestone and bass player Jay Bentley left during the recording of the first song.
Only 10.000 of these albums were produced and distributed, but almost all were quickly returned to Epitaph's warehouse. Guitarist Brett Gurewitz jokingly recalls having "[sent out] ten thousand copies and [getting] eleven thousand back." However, many did in fact end up in the hands of fans, when Brett Gurewitz's girlfriend Suzy Shaw, who worked at the warehouse, surreptitiously sold all but 300 of them.
The album is generally disowned by the band, and there has never been a second pressing. Despite its abandonment however, it has become highly desirable and is now something of a collector's item. The band has commented on the album on their site saying that they are not trying to hide it from fans, and that anyone who listens to it will understand why they have never re-released it.
Source: Wikipedia

I heard this forever ago and have been looking for it ever since! (unwilling to pay amazingly high ebay/gemm vinyl prices) Many thanks.

Incidentally, I saw Bad Religion in the 90s, touring for one of the forgettable albums they put out around then, and they played "Billy Gnosis," obviously in a more "traditional" Bad Religion sound. So they haven't totally abandoned every bit of the album.

I've had this album as a copied tape once (a friend of mine has one of the vinyl records).

I have to say I really really like it! I actually don't understand why they never re-released it!

I mean, Bad Religion and Greg Graffin on his "solo-paths" have recorded loads of acoustic songs that are (partly) inferior to "Into The Unknown"!